Powell’s resolve keynote speech on Friday shook the financial markets to their core. The effect that Chairman Powell had when he rebuffed expectations of the Fed’s tempered monetary policy was strong. His message underscored that the Federal Reserve will continue its hawkish monetary policy and keep raising interest rates in its fight against the spiraling level of inflation.

His speech resulted in an exceedingly powerful selloff in US equities including a 1000-point drop in the Dow. It also resulted in a $20 drop in gold pricing on Friday. That selling pressure in gold continues on Monday morning in Australia when traders witnessed a further price decline.

The chart above is a 60-minute Japanese candlestick chart of gold futures. The chart contains two technical studies including a 50-hour simple moving average and a Fibonacci retracement. The Fibonacci retracement begins at $1679 a low achieved at the end of July up to $1824 the recent top that occurred during the second week of August. The initial shock Powell’s keynote speech took gold pricing from just below $1780 to today’s intraday low of $1731.40. The 61.8% Fibonacci retracement occurs at $1734.60 and when prices moved to these lows earlier in trading today market participants interpreted this selloff as putting gold in an oversold scenario and quickly bought the dip.

Whether this U reversal was most likely generated by market participants entering long positions as well as covering short positions. Traders move gold off of the low and took pricing to today’s high of $1757.90 before prices began to consolidate with a bias to the downside. The net result was that gold moved from the lows at $1731 to a neutral status in Globex trading after New York closed.

As of 5:05 PM EDT gold futures basis, the most active December contract is currently fixed at $1749.50 which is a net decline of $0.30. It has been oscillating over the last few hours between trading fractionally higher and lower on the day. 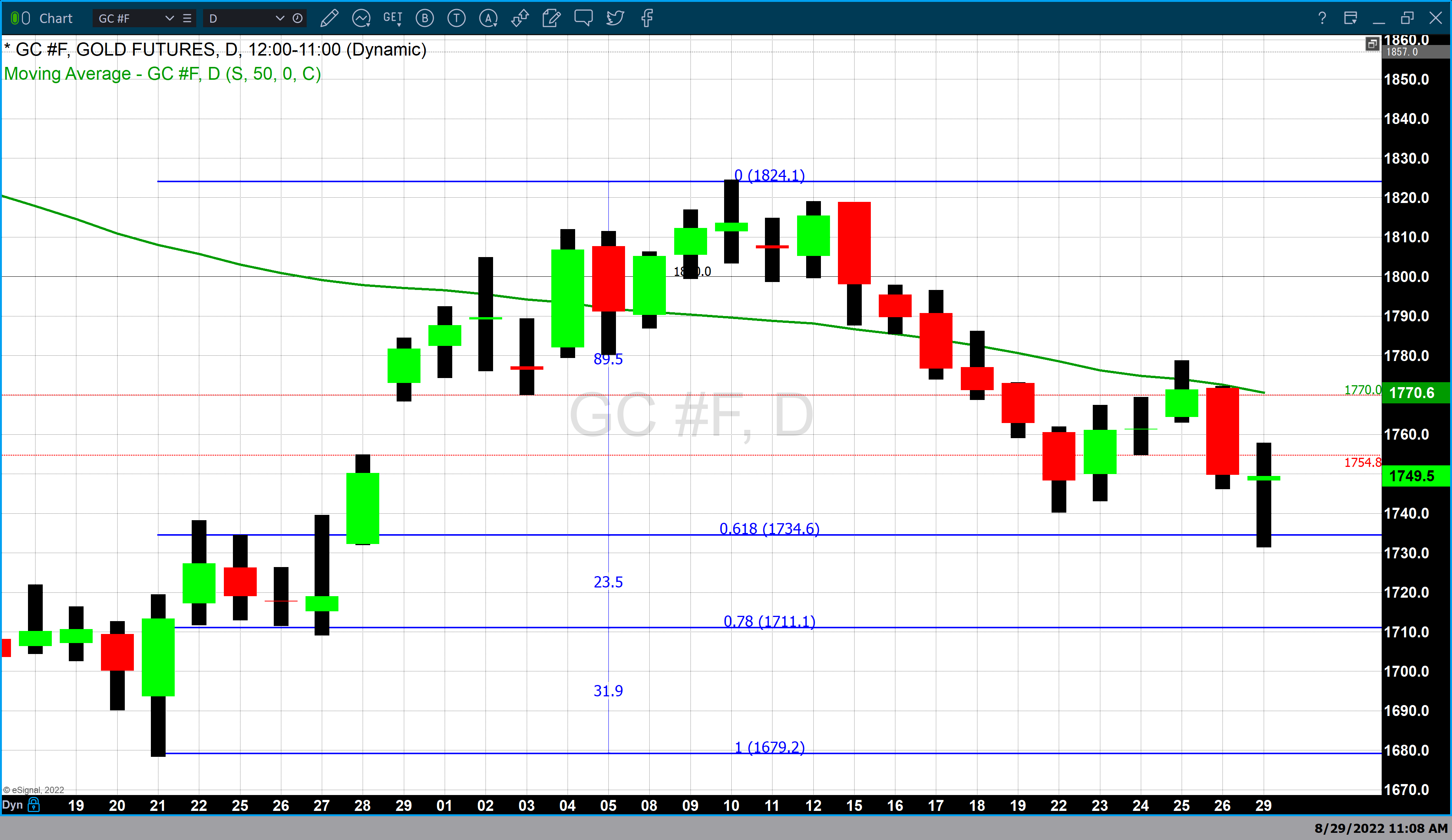 The chart above is a daily Japanese candlestick chart of gold futures. The single candlestick that forms today is identified as a “Doji”. The Doji candlestick forms when the opening and closing prices are identical or a few ticks apart. Furthermore, the long upper wick and longer lower wick allow us to identify today’s Japanese candlestick as a “Long legged Doji”. The accepted identification of this type of candlestick breaks the Doji into five different types. 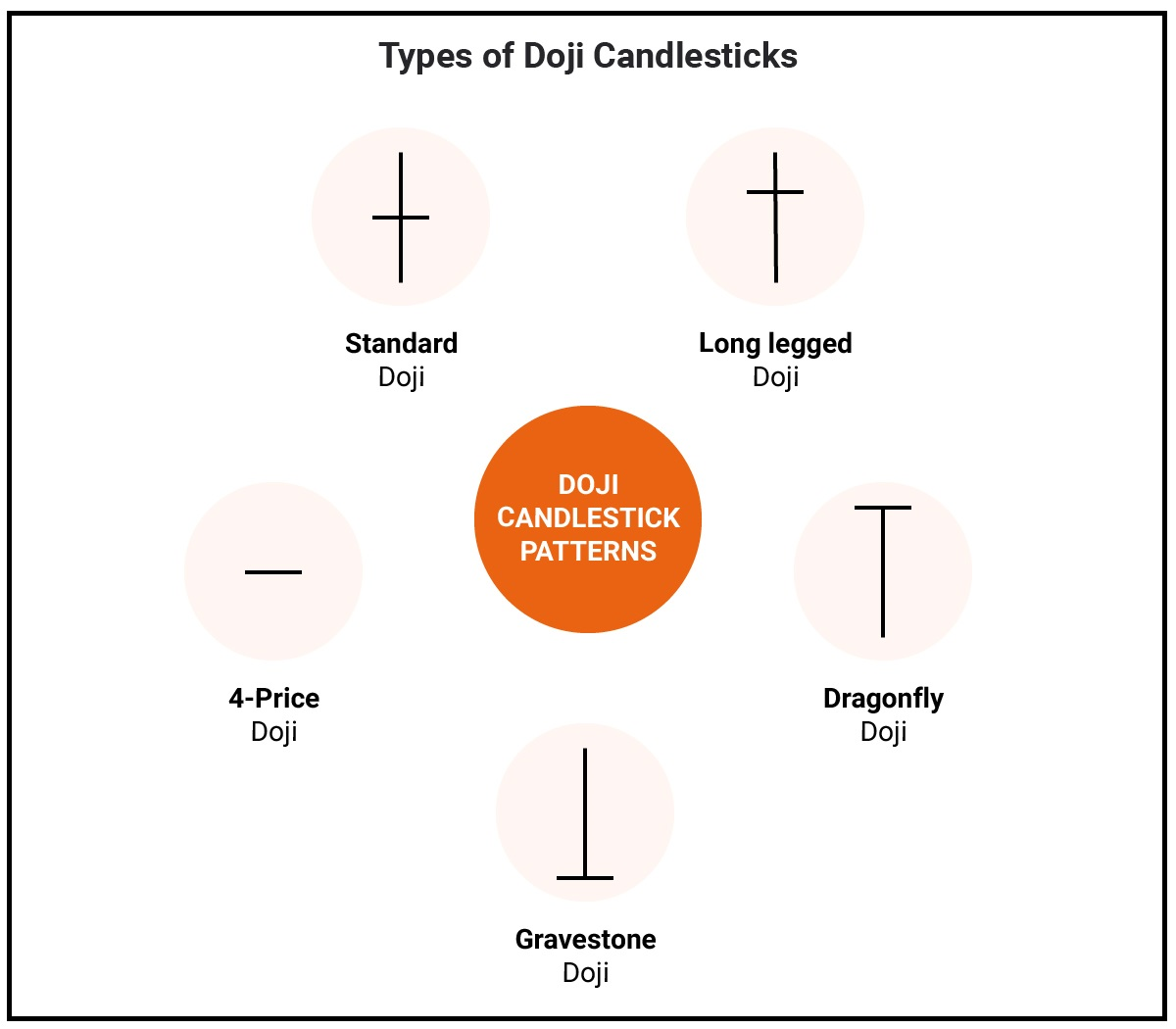 The graph above illustrates the five types of Doji candles. Regardless of the type of Doji candle identified this candlestick type indicates that neither the bullish nor bearish factions have dominated trading activity during the time cycle that created it. It is interpreted as either simply a period of consolidation or can be part of a larger pattern that can indicate bullish or bearish reversals. In the case of today’s Doji candlestick, it is too early to discern if it will form into a more complex pattern indicating a potential short-term reversal.

For more information on our service, simply use this link

Wishing you as always, good trading,